Yesterday, news broke that an 8000+ carat gemstone was found by a South African property developer.

Previously, the largest stone found was the Star of Africa, weighing 3107 carats – found over 100 years ago by De Beers.

However, doubts have been raised as to whether the gemstone, shown below is really authentic. One expert says that it looks like fluorite crystal, a semi-precious gemstone whose worth is negligible compared to the value of a diamond. 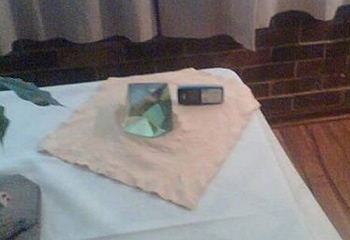 In case you’re wondering, 8000 carats is over 1.6 kilograms! That’s one big rock. Just imagine – with 8000 carat, you could produce enough diamonds to rival any of those evil internet sites!

This entry was written by Nikhil Jogia and was posted on on Wednesday, August 29th, 2007 at 5:58 pm and is filed under Diamonds. You can follow any responses to this entry through the RSS 2.0 feed. You can leave a response, or trackback from your own site.