White Gold vs Platinum – What Jewellers Wont Tell You

Last week I received brochures from both The Platinum Guild and World Gold Council, espousing the benefits of their respective metals. However, during the purchasing process many consumers take advice from a jewellery sales person and end up bereft of any useful facts on the subject. 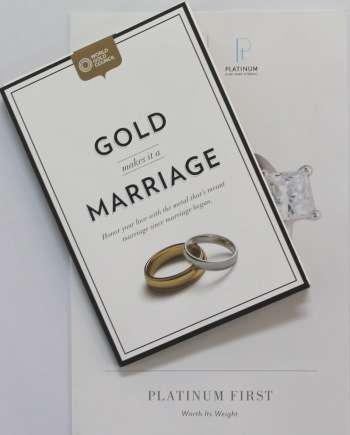 The fact of the matter is, is that both white gold and platinum both have their own unique properties and hence benefits. By and large, many of these are not explained too well to the would be jewellery buyer, but are outlined below.

Two properties of metals that aren’t well understood by the jewellery industry as a whole and jewellery consumers are hardness and malleability. In fact, when I told my own jewellers that platinum was softer than white gold, I received nothing but protests.
Put simply, hardness refers to a metal’s resistance to scratching and denting. A hard metal, just like diamond, the hardest material known, will be resistant to scratches, whilst a soft metal will scratch easily. Malleability refers to how easy a metal is to bend and turn into different shapes without breaking. A malleable metal will bend easily, whilst a brittle metal will not bend easily.
Whilst it may be true that platinum is harder than gold in its purest form, 18kt white gold is mixed with other metals, most commonly palladium, silver and copper to make it harder. This results in 18kt white gold being harder than platinum alloys, which are most commonly 95% platinum.
On the other hand, platinum is more brittle than white gold, and is hard to bend and hammer into shape, which may explain the aforementioned protests from my jewellers.
What the hardness and malleability of white gold and platinum means in real life is that a platinum ring will be easily scratched and dented, but will hold diamonds and other gemstones more securely, as platinum is less prone to bending due to its brittleness. However, to get the best of both worlds, we have been encouraging our clients to buy rings with a platinum setting and a white gold band. This results in a more secure setting for the centre diamond, whilst the white gold band results in less scratches and dents.
Platinum’s softness versus white gold is also the main reason why we don’t recommend platinum for mens’ wedding rings.

Platinum alloys are about 20% denser than white gold. This results in a ring that feels more substantial, and thus more luxurious, even though it may be very fine.

With the spot price of platinum and gold being very much the same nowadays, many people ask us why platinum is still more expensive that white gold. There are four main reasons for this:

One of the benefits espoused by The Platinum Guild is that platinum is hypoallergenic. Whilst this is true, so is most 18kt white gold, in Australia at least. Whilst nickel was commonly used to alloy white gold in the past, most manufacturing jewellers in Australia use a palladium based alloy that is free from nickel. However, nickel, being a much cheaper metal than palladium is still used widely overseas, and thus some people may suffer from nickel allergies with imported jewellery. 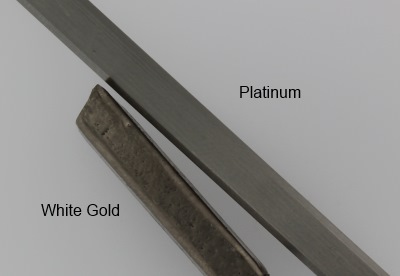 Above: White gold and Platinum in square wire form.

Platinum loses very little weight during day to day wear and indeed, during polishing. Therefore, in theory a platinum ring will last a lot longer without the need for replacing the band. However, a well made ring, whether white gold or platinum should last for generations.

White gold is more widely serviceable than platinum, meaning that more jewellers are able to resize and repair white gold jewellery. In addition to this, platinum’s higher melting temperature pose a risk to gemstones  and diamonds that may get burnt when repairing platinum jewellery. However, modern tools such as laser welders and an experienced platinum jeweller eliminate these problems.

Since gold is a widely traded asset and investment, gold in both pure and alloy form is a lot easier to sell than platinum. Whilst numerous gold buyers have sprung up in recent times, very few of these buy platinum.

This entry was written by Nikhil Jogia and was posted on on Thursday, June 6th, 2013 at 3:16 pm and is filed under Buying Advice. You can follow any responses to this entry through the RSS 2.0 feed. You can leave a response, or trackback from your own site.