Fluorescence – From Foe to Friend?

Over the past 18 months, we have been stocking a good number of diamonds with fluorescence. In days gone by, high colour diamonds with strong fluorescence were marketed as “blue-white” diamonds and commanded a premium. In modern times however, fluorescence has been typically frowned upon by the trade and therefore consumers. However, is this about to change?

Over the past year, I’ve heard some pretty crazy things from people in the trade about fluorescence. One jeweller told a client that fluorescence will make a diamond go black over time. Another so-called “lab-director” of a Sydney based grading lab which touts itself as the only lab to grade transparency said one of our diamonds lacked transparency due to the presence of strong blue fluorescence – without even seeing the diamond!

However, lately I have noticed that there seems to have been a genuine change in thinking about fluorescence within the trade.

In general, the main argument that these “anti-fluorescents” use is that fluorescence causes haziness when subjected to ultra violet light, eg: sunlight. However, I have yet to personally witness a diamond that visibly lacks transparency due to fluorescence. Perhaps I have lived a sheltered life in terms of hazy stones, but I’d be willing to bet that more diamonds lack transparency due to other factors such as inclusions or graining than fluorescence. 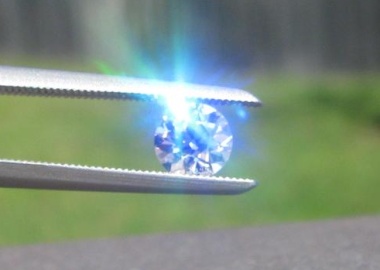 Above: A fluorescent diamond in sunlight

Now, in the past week, the GIA have come to the fluorescence party. This page outlines the facts about fluorescence, whilst this page will be included with every GIA report. Hopefully, with the GIA educating consumers and including easy to read brochures about the facts on fluorescence with their reports, these “anti-fluorescents” will be silenced and more fluorescent diamonds will be sold. Perhaps now is the time to buy a fluorescent diamond in the expectation that prices will rise??

This entry was written by Nikhil Jogia and was posted on on Monday, July 20th, 2009 at 3:08 pm and is filed under Diamonds. You can follow any responses to this entry through the RSS 2.0 feed. You can leave a response, or trackback from your own site.

4 Responses to “Fluorescence – From Foe to Friend?”