The early to mid-2000s proved to be the heyday for Australian diamond grading laboratories. At its peak, there were five major labs – ADGL, Auscert, Bauer Gem Labs, DCLA and GSL. Diamonds certified by these five labs dominated the Australian diamond industry – from chain stores to high end retailers. Nowadays, the popularity of these certificates have dramatically declined, at least one of the aforementioned labs has closed and no new labs have opened, including the much hyped, or some say maligned, EGL Australia.

The reasons for this decline is not because of the quality of the diamond grading, which I by enlarge held in very high respect. However, a number of factors created “the perfect storm” which culminated in both the market for local certification shrinking and consumer attitudes towards local labs waning.
Most labs simply didn’t market their services well enough. It’s one thing to set up a lab with fancy initials like ADGL or BGL, but it’s another thing to build trust with consumers from outside the industry. One lab, DCLA, did an excellent job at this. Professionally designed certificates with shiny graphics, “international recognition”, high-end equipment and numerous media appearances were part of a superior marketing strategy that built trust with consumers from outside their jewellers. At one stage, DCLA looked like becoming the Australian version of GIA and Rapaport in one. However, their marketing strategy was perhaps too good – it alienated a lot of wholesalers, retailers and jewellers, not because they were wrong, but because of the way they communicated these messages. Eventually, a series of mis-steps on their part set in motion their downfall. 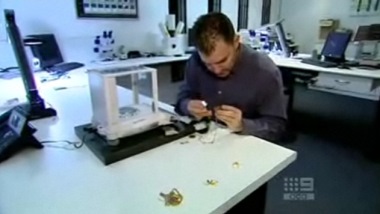 Above: A former lab director now in the gold buying business – note the machines in the background.

The price of the actual certification was also a concern for many wholesalers and retailers. The tools and equipment used, especially by DCLA, probably wouldn’t have produced much change from a million dollars. The problem with this, is that you have to certify a lot of diamonds to be able to justify such expenditure. Strangled with high equipment costs, certification costs were two to three times what GIA charged.
The rise of GIA and the decline in imports of uncertified diamonds into Australia is commonly cited as the main reason for the decline of Australian labs. The reason behind this is that consumers are at least looking to the internet to research, if not buy a diamond, and 99% of the internet sites will recommend GIA as the best lab in the world without any question. Secondly, GIA’s expansion has allowed a massive decrease in turnaround times. In the mid 2000’s, GIA’s only diamond grading labs were in the US, and the turnaround time was four to six weeks. That meant a diamond manufactured in India took five to seven weeks including transit to be certified. This huge turnaround time from GIA opened the door for uncertified goods to be sold, exported, and then certified by a local lab. This all changed in 2008 when GIA agressively opened new labs in major diamond hubs around the world. Consequently, turnaround times were slashed and uncertified goods fell out of favour with diamond dealers.
Lastly, for the most part, Australian labs didn’t innovate or create a point of differentiation. Whilst I acknowledge that DCLA do grade transparency, which few, if any labs around the world do, no lab really created a “better” certificate than GIA did. Photos, cut grading of fancy shapes, grading of “eye-cleanliness”, unique grading scales are all things Australian labs could have done, but unfortunately, like sheep followed traditional thinking by simply listing the 4C’s. DCLA even boasted they were internationally recognised because they used the IDC scale when grading, which from a consumer’s perspective, is possibly is the worst scale to use.
Whilst Australian diamond grading labs still exist, some are a shadow of their former selves. Even though overseas diamond certificates now dominate the industry, these labs play an important role in valuing and verifying diamonds and some such as Auscert and GSL specialise in gemstones other than diamonds.

This entry was written by Nikhil Jogia and was posted on on Monday, May 13th, 2013 at 7:01 pm and is filed under Diamond Industry. You can follow any responses to this entry through the RSS 2.0 feed. You can leave a response, or trackback from your own site.

2 Responses to “The Death of Australian Diamond Grading Laboratories”