In the past year, princess cut diamonds have considerably more popular than in past years, selling at the rate of approximately 70% of round diamonds.

The princess cut has the following advantages:

Below are two diamonds, one round, one princess, both 0.75ct. As you can see, under magnification, the princess cut diamond looks only slightly smaller, despite being half the price: 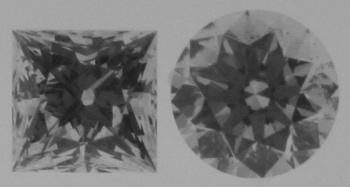 The princess cut also lends itself to “corner claws”, as opposed to prongs, like say a Tiffany setting, as seen below: 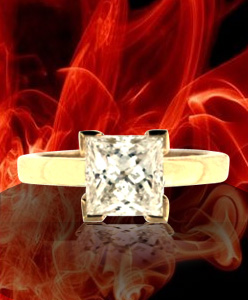 This entry was written by Nikhil Jogia and was posted on on Wednesday, August 20th, 2008 at 3:09 pm and is filed under Buying Advice. You can follow any responses to this entry through the RSS 2.0 feed. You can leave a response, or trackback from your own site.