A few weeks ago, the Jewellers’ Association of Australia (JAA) released their highly anticipated Code of Practice. 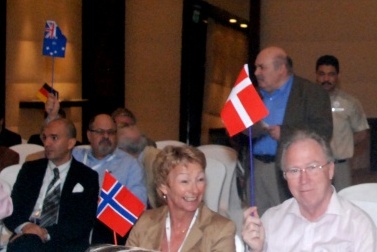 Above: My friend, Ian Hadassin holding up the Australian flag higher than anyone else!

It’s 25 pages long, but most of it talks about the code’s purpose and administration. Of the code’s actual principles, these are the main ones:

Whilst the Code of Practice is a positive move, it simply details what industry participants should be doing AS DESCRIBED BY LAW. Therefore, it acts more of a reminder or clarification of the law to a very small minority of retailers and wholesalers. It does not however address the real issues facing the industry such as:

I’m sure there’s plenty of other issues facing the Australian jewellery industry, and it is clear that the new JAA Code of Practice simply does not go far enough. However, if the Code of Practice gets just one retailer or wholesaler to change there errant ways, will it be considered a success…? Possibly.

This entry was written by Nikhil Jogia and was posted on on Sunday, December 6th, 2009 at 3:51 pm and is filed under Diamond Industry. You can follow any responses to this entry through the RSS 2.0 feed. You can leave a response, or trackback from your own site.