In 2013, I wrote about the differences between white gold and platinum. Back then, 18kt white gold was still cheaper than platinum, however, for the past four years, platinum prices have been steadily falling and have come down to record lows compared with gold.

As the chart below shows, the price of platinum has been significantly less than gold for nearly four years now – in fact, the platinum to gold ratio now stands at about 0.70, meaning platinum is worth about 70% of gold. 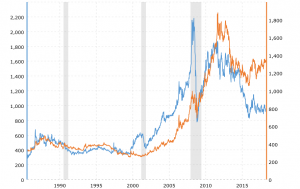 Given this sustained price change, we made the decision to stop offering white gold as an option for our engagement rings and start offering platinum as the standard white metal. We also offer engagement rings in 18kt yellow and rose gold, both paired with platinum settings. As far as I am aware, Jogia Diamonds is the only jeweller (at least online) to offer platinum at the same price as 18kt gold.

However, whilst platinum may be only 70% of the cost of gold, the true cost of platinum and 18kt white gold needs to be taken into account.

However, there are many “hidden” costs of platinum such as:

All of these costs add to the cost of producing a platinum ring, which in turn makes platinum jewellery more expensive to produce than in 18kt white gold – but not by much.

As alluded to previously, platinum is far less prone to bending, thus holds diamonds in more securely. Therefore is a much more suitable metal for engagement and wedding rings which are diamond set and are worn on a day to day basis. However, for other jewellery such as mens wedding rings, I would still recommend 9kt or 18kt white gold as these alloys are harder than platinum alloys and there usually aren’t any diamonds set into the band.

Lastly, as one of our metal dealers commented to me a few months ago – “There’s a lot less platinum in the world than gold”, indicating that platinum is massively undervalued, confirmed by one analyst stating “The current monthly average ratio below 0.85 is unusual and indicates that platinum is severely undervalued with respect to gold.”

This entry was written by Nikhil Jogia and was posted on on Wednesday, October 10th, 2018 at 4:31 pm and is filed under Taking Care of Business. You can follow any responses to this entry through the RSS 2.0 feed. You can leave a response, or trackback from your own site.